The Technologically Impaired Duck is an internet meme which featured a centered image of a white duck usually overlaid with text about technological ignorance or misunderstanding. Before being popularized in bulletin boards and meme generators, the original image of the duck, which is actually a photo of a white mallard taken on 31 March 2003, was culled from FreeFoto.com, a widely used stock photo site. 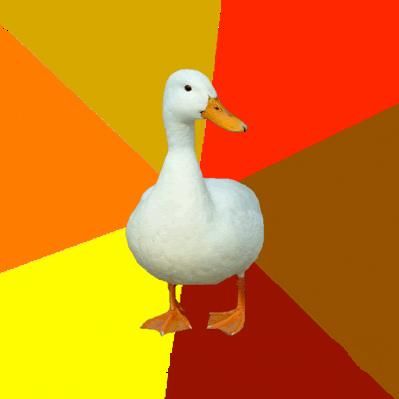 In this world where everyone seems to be comfortable with using computers and embracing technology, it is still easy to bump into someone whose digital naiveté easily trumps that of the technologically impaired duck’s. It’s very common to find them at home (think of granny), in school (think of that history class teacher who shares how he witnessed the Kennedy assassination), and most especially in the office (raise your hand if had a boss who still uses IE 6).

So, what are the signs that say there’s a technologically impaired duck lurking in your midst?

Types messages in all caps

Common courtesy on the internet dictates that one shouldn’t type in all caps. People make many assumptions about a person who does this. They might think he or she is irritable, or the reader may think that the writer is yelling at him or her, or perhaps they might assume that this person demands attention or is simply downright immature. But perhaps the most common thing people tend to think when seeing someone typing in this manner is that you’re technologically inept. Formal written materials found online these days are traditionally composed of a combination of capital letters and lower case letters. An individual who doesn’t conform to this practice can oftentimes be described as someone who can’t use a computer properly.

If you know someone who takes 15 minutes to select a block of text, right click it, look for the “Copy” command, shift to a new window, and “Paste” it, then you’re in for a long ride with a technologically impaired duck. Tell them to hit Ctrl + A, Ctrl + C, Alt + Tab, and Ctrl + V, in that exact order – they’ll be done in a minute or less. Or you can simply tell them to RTFM for good measure.

It happens all the time. One colleague or group mate creates and amazingly formatted document, sends it to everyone, and expects it to appear exactly the same on other computers. If you’re going to send heavily formatted documents, be considerate enough to know that not everyone in your audience has Microsoft Word or Microsoft PowerPoint installed on their computers. Not everyone will see the same fancy font you used on that supposedly compelling presentation. If you think the formatting of a document really matters for the sender and the receiver, then you can suggest transforming the document into a .PDF file first in order to keep the formatting intact.

Typing with one hand (or worse, one finger!)

Another indicator that says someone is technologically impaired is when he or she types using only his or her index finger. People nowadays are expected to be able to practice proper rapid typing, which typically involves using most (if not all) terminal members of the hand, whether it’s just for typing a quick email or preparing to send an internet fax to a client.

Yes, technologically impaired ducks will continue to test people’s patience whether it’s at home, in school, or in the office. But while this type of people may easily get on your nerves (considering that you would devour anything remotely related to technology), you need to spend some serious time to start treating the situation as a non-issue and give them the chance to learn. As they say, we were all beginners once.